The Gazette published a guest column on Sunday, September 14, 2014 written by the Sexual Health Alliance of Linn & Johnson Counties. A link to the column on The Gazette’s website is available here. Below is the full column:

Sexually transmitted disease rates in Linn and Johnson counties are rising. I encourage parents and educators to consider evidence-based, comprehensive sexual health education for students that would help lower rates.

“Evidence-based” means the program has been proven to effectively show positive changes in students’ sexual behaviors. “Comprehensive” means the program is medically accurate, age-appropriate, theory driven and teaches abstinence (but is not abstinence-only) to help students develop interpersonal and communication skills.

According to the National Sexuality Education Standards, comprehensive programs have been shown to help youth delay the onset of sexual activity, reduce the frequency of sexual activity, reduce the number of sexual partners, and increase condom and contraceptive use. Comparison studies have found comprehensive programs to be more effective than abstinence-only programs.

There are many ways parents and individuals can advocate for a comprehensive, evidence-based curriculum. These include knowing the official state and school system policies on sexual health education; learning what their student’s school offers and what training their teachers have had in sexual health education; speaking with administrators; and joining school health education committees and/or participating in school board meetings. Fortunately, our community has many resources and trained professionals at its disposal. We encourage parents and educators to reach out to the SHA at shacoalition.com/ or sexualhealthalliance@gmail.com.

Seth Owens is board president of the Sexual Health Alliance of Linn & Johnson Counties. Comments: seth.j.owens@gmail.com. 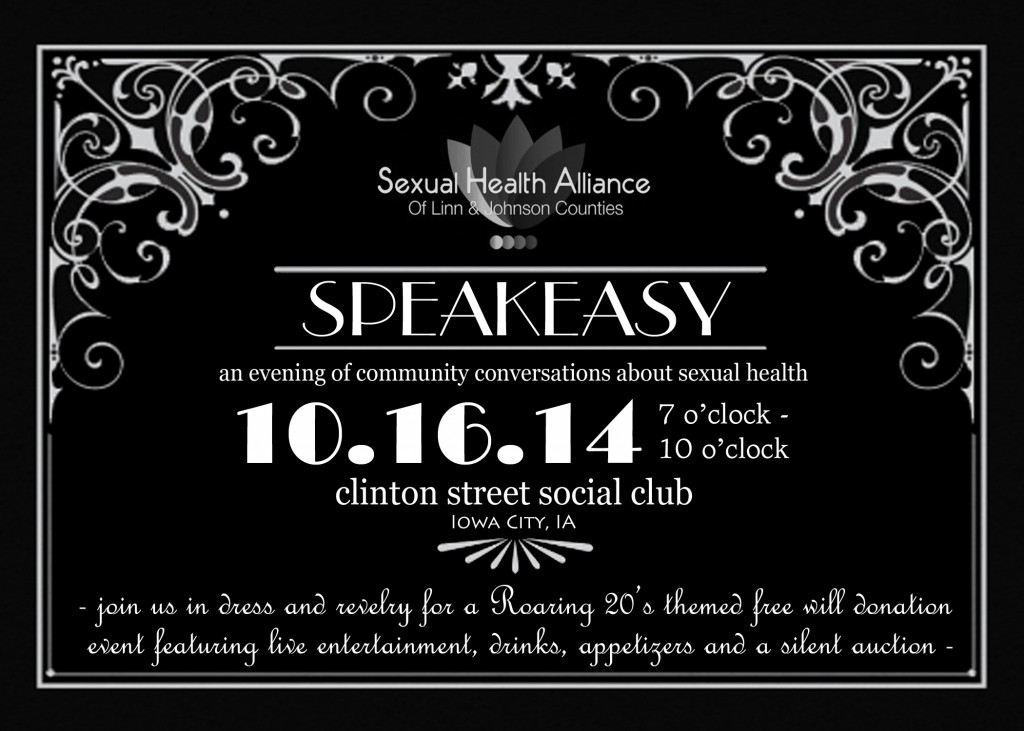 Please join us for an evening of community conversations about sexual health! The event is happening on Thursday, October 16, 2014 at the Clinton Street Social Club (18 1/2 S Clinton St, Iowa City, IA 52240) from 7 – 10 pm. There will be live entertainment, drinks, appetizers, and a silent auction.

This event is hosted by the Sexual Health Alliance of Linn & Johnson Counties.

The Gazette published an article on Friday, August 8th, 2014 written by Chelsea Keenan. A link to the column on The Gazette’s website is available here. Below is the full column:

Sexually-transmitted diseases account for the greatest proportion of infectious diseases in Linn County.

That’s according to a new report from Linn County Public Health that gives a countywide assessment of health status and health risks on everything from chronic and infectious diseases to homicide and suicide rates.

In 2012, there were 986 cases of chlamydia, 230 cases of gonorrhea and six cases of syphilis in Linn County. And while the gonorrhea rate in the United States has been decreasing from 2000 to 2012, it has been increasing in Iowa.

“We need to be aggressive as a community,” said Pramod Dwivedi, Linn County Public Health director. “It is profoundly important to take note of these and do something about it.”

Dwivedi said while Linn County Public Health does not have a campaign planned, it is working with the Sexual Health Alliance of Linn and Johnson Counties, a group of organizations and individuals working to educate the public about safe sex and distribute free condoms.

Dwivedi said the alliance has targeted populations at a greater risk of contracting an STD, including young adults, the gay community, those with substance abuse problems and those with multiple sexual partners.

Teenagers and young adults between 15 to 24 have significantly higher rates of STDs than those in older age groups. Statewide, teenagers account for 26 percent of chlamydia cases and 20 percent of gonorrhea cases, according to a report from Eyes Open Iowa, a Des Moines-based group that advocates for adolescent sexual health.

Fairholm said it’s important that teens receive education about STDs, how to avoid them and how to treat them.

“This is vital health information,” she said.

Teenagers 15 to 19 years old accounted for 1,392 diagnosed chlamydia cases and 361 diagnosed gonorrhea cases in Linn County from 2008 to 2012, according to Eyes Open Iowa data.

This averages to 278 cases of chlamydia and 72 cases of gonorrhea each year, which gives Linn County the ninth-highest chlamydia rate and the third-highest gonorrhea rate in the state, Fairholm said.

Linn County Public Health wants to reverse these trends. The organization has set a goal to reduce by 10 percent by 2020 the number of teenagers and young adults with chlamydia and gonorrhea.

What’s more, females have higher STD rates when compared with males — making up 70.2 percent of chlamydia cases and 66.1 percent of gonorrhea cases in Linn County, according to the public health department.

Because STDs are often asymptomatic, meaning infected individuals often don’t show any signs of the disease, they can go untreated.

Women frequently will find out they have chlamydia or gonorrhea when they go in for their yearly check up, are pregnant or to get birth control, she said.

“There’s also a fear factor for males,” Meador said. “The test used to be uncomfortable, so they would wait until they showed symptoms before they got tested.”

But STDs cause damage to the body in other ways, including joint pain or scarring of reproductive organs.

There are two upcoming free screenings of the documentary Before You Know It happening in Iowa City. See the flyer below for more information. The Sexual Health Alliance will have a booth at the FilmScene screening on 6.17.14 (and as part of the Iowa City Pride Fest on 6.21.14). 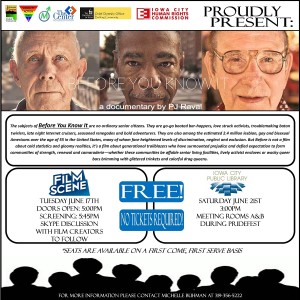 For more information about the documentary, go to http://beforeyouknowitfilm.com/

The Gazette published a guest column on Sunday, April 21, 2014 written by the Sexual Health Alliance of Linn & Johnson Counties and the Linn County Immunization Coalition. A link to the column on The Gazette’s website is available here. Below is the full column:

The HPV vaccine protects women and men from getting the most common types of HPV. There are two different brands of the vaccine: Cervarix and Gardasil. Both kinds are safe and effective. The federal Centers for Disease Control and Prevention (CDC) recommends that all children between the ages of 11 and 12 be vaccinated with the three-dose series. The vaccine may be given to people ages 9-26.

To get the vaccine for you or your child, talk to your health care provider or call a clinic near you. Many health insurance plans cover the cost of the HPV vaccine, but check with your insurance plan to be sure. Children younger than 19 who are uninsured or Medicaid-eligible can get the vaccine through the Vaccines For Children (VFC) program.

An investigation from the Vaccine Safety Datalink of more than 600,000 people who got the HPV vaccine found no serious adverse events were more likely to occur in those who got the vaccine than those in comparison groups. The HPV vaccine works.

Dr. Tom Frieden, CDC director, stated, “The vaccine works. It works even better than we had hoped.” The HPV vaccine is safe, with more than 57 million doses given without identifying a problem. It’s effective at preventing cancer.

Two local coalitions, the Linn County Immunization Coalition (LCIC) and the Sexual Health Alliance of Linn & Johnson Counties (SHA), are working to increase the number of people who have completed the HPV vaccination series. LCIC seeks to protect the community through education and vaccination. LCIC will be offering HPV clinics throughout Linn County during 2014 and 2015. Additionally, LCIC will be producing educational material to help the community understand the safety and importance of the HPV vaccine.

For more information about either coalition, or if you need help finding the HPV vaccine, check out the coalitions on Facebook, email them or visit the coalitions’ websites: 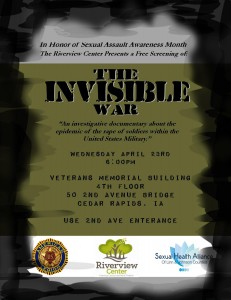 The Sexual Health Alliance of Linn & Johnson Counties is co-hosting a free screening of the documentary The Invisible War for Sexual Assault Awareness Month. The screening is happening Wednesday, April 23, 2014 at 6:00 pm at the Veterans Memorial Building, 4th floor, 50 2nd Ave. Bridge, Cedar Rapids. Use the 2nd Ave. entrance.

The Invisible War is an award-winning and critically-acclaimed documentary about sexual assault in the United States military. Here’s a link to the trailer: http://www.youtube.com/watch?v=ECOqpv45tIo For more information about the documentary, go to: http://invisiblewarmovie.com/

SHA is co-sponsoring this screening with the American Legion and the Riverview Center. 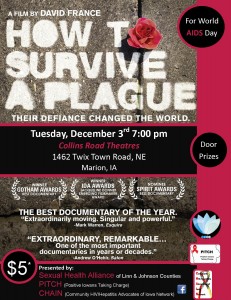 Please join us for a free community showing of the documentary How To Survive a Plague. The documentary will be shown at 7:00 pm on Tuesday, December 3rd at Collins Road Theatres (1462 Twix Town Road NE, Marion) for World AIDS Day.

In the 80s and 90s, two coalitions, ACT UP and TAG (Treatment Action Group), helped turn HIV/AIDS from a death sentence into a manageable condition. The critically-acclaimed documentary How To Survive a Plague tells the powerful story of these two coalitions.

Health professionals, college students, educators, parents and anyone interested in learning more about the history of HIV/AIDS activism is welcome to attend. The Sexual Health Alliance of Linn & Johnson Counties (SHA) is co-hosting this screening in partnership with the Community HIV/Hepatitis Advocacy of Iowa Network (CHAIN) and Positive Iowans Taking Charge (PITCH).

For more information about this film or to see the trailer, please go to surviveaplague.com. The film is unrated. 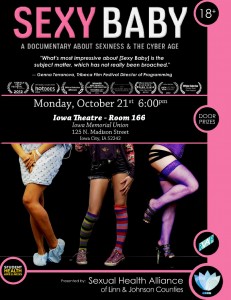 Please join us for a community showing of the documentary Sexy Baby. The documentary will be shown at 6:00 pm on Monday, October 21st in the Iowa Theater (Room 166) at the Iowa Memorial Union.  Following the film there will be a brief interactive panel for group discussion.

Parents, educators, college students and anyone interested in the effects that the internet has had on women’s health and self-esteem are encouraged to attend.

Due to the content of this film, attendees should be 18 years or older.  For more information about this film or to see the trailer, please go to www.SexyBabyMovie.com. 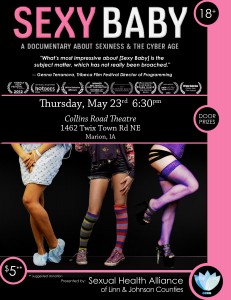 Please join us for a community showing of the documentary Sexy Baby. The documentary will be shown at 6:30pm on Thursday, May 23rd at the Collins Road Theatre.  Following the film there will be a brief interactive panel for group discussion. Panelists will include:

Parents, educators, college students and anyone interested in the effects that the internet has had on women’s health and self-esteem are encouraged to attend.

The suggested donation for this documentary is $5.  Due to the content of this film, attendees should be 18 years or older.  For more information about this film or to see the trailer, please go to www.SexyBabyMovie.com.